Could This Be Your Melbourne Cup Horse? CHRIS WALLER TO TRAIN! 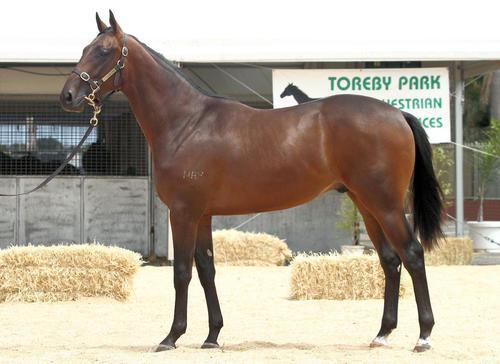 Chris Waller is one of the superstar trainers of Australian racing.

The current leader on the Sydney trainers premiership, Chris’s achievements over the last few years have been nothing short of amazing. To overhaul the might of Peter Snowdon and his team of blue blood thoroughbreds bankrolled by the monumental wealth of Sheik Mohammed bin Rasheed Al Maktoum, and to outpoint the juggernaut that is Tulloch Lodge and Gai Waterhouse has been a phenomenal achievement. Everyone in racing will tell you that Chris is one of nicest blokes you could ever wish to meet, and if you’d like a shot a winning some good races in Sydney, then surely you couldn’t do much better than having your horses trained by Chris Waller….

This striking colt which is being offered for sale by syndication, was bred in Western Australia and offered for sale with a $50,000 reserve at the recent Magic Millions Perth Premier Yearling Sale. After not quite reaching his reserve price, the owners decided to send him, (along with four others) to NSW to have a crack at Sydney racing…

BLACKFRIARS is a very regally bred stallion by the great DANEHILL from the Group 1 placed Kensington Gardens-one of Australia’s great winner producing broodmares. As a 3yo racehorse in the Spring of 1999, Blackfriars won The Norman Robinson Stakes (G3) and the much coveted Group 1 VRC Derby (over 2500m) beating fellow Group 1 winners SHOGUN LODGE and DIATRIBE (Caulfield Cup).

As a stallion at stud, Blackfriars has produced over 120 individual winners such as PLAYING GOD, GOD HAS SPOKEN, WAVE ROCK, IMPACT RATING, TOM’S SIX (Hong Kong) and MANSION HOUSE, who between them have won over $10M in prizemoney. Probably the best thing about the stock of Blackfriars though, is that you don’t have to pay a King’s Ransom to buy one! Standing at a modest service fee of just $8,800, he’s proven that he can produce both sprinters and stayers, and
amongst those 120 individual winners produced so far, 14% of them are Stakes grade racehorses, the best of them being the Group 1 Kingston Town Classic winner Western Australian PLAYING GOD, a superstar colt who cost a mere $27,000 as a yearling…

This colt’s Dam (mother) is the three times winning Military Plume mare, Belle de Plume. Originally purchased by Belhus Racing Stables from the Inglis Classic Sale in Sydney, she won three races in Perth up to 2400m. As a broodmare, she’s produced a couple of handy horses from just two to race, the best of them being Xaarphonic who so far has won 5 races and is now being set for the Bunbury/Pinjarra Cups.

When you consider that Blackfriars won to 2500m, and Belle de Plume won to 2400m, you’d have to say that this colt has a better than even chance of developing into a stayer. A Melbourne Cup chance maybe?

There are 10 shares available priced at $8,490 each which covers all horse related and syndication costs to June 30th 2011, including initial breaking in and GST. All 10% (or more) shareholders get their name on the official registration papers and in the racebook, and will also be billed their pro rata share of training, agistment etc expenses directly from the service provider wherever possible. Half shares (5%) are available for $4,245, and owners will be included as part of a syndicate that will own a proportion of the horse to be announced.

There’s no doubt that owning a racehorse can be one of the most exciting things you can ever do. It pays to put the odds in your favour though and have a bit of class on your side when you go to the races as an owner. This colt has the depth of pedigree and the physique required to do the job required of him. I’ve coupled him up with Sydney’s Leading trainer Chris Waller to help him on the way! All he needs now are the owners to come along and enjoy the journey. I hope you can be one of them…

STOP PRESS 1: The colt’s half brother Xaarphonic won again at Ascot on Wednesday!

STOP PRESS 2: $767 “Punting Package” option included for every full shareholder! You’ll get a FREE $500 Betting Account with either Sportingbet or Betezy (*available to new client of theirs only), and a FREE one month’s subscription to CHAMPION PICKS selection/tipping service!