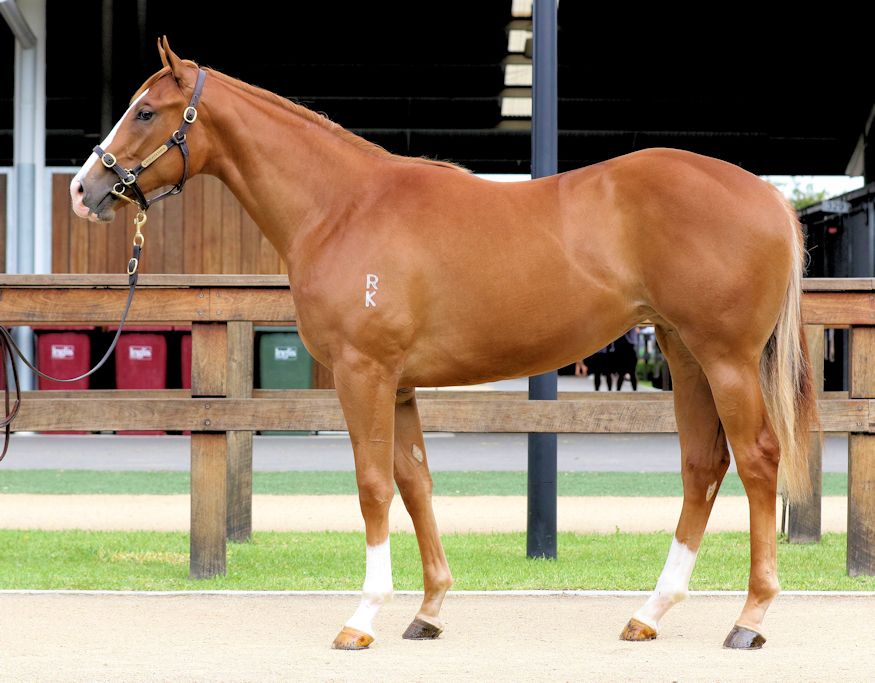 Of all the new season stallions with yearlings selling this year for the first time, surely IMPENDING has to be voted ‘most likely to succeed’!

He was a star on the racetrack winning 5 times and being placed 8 times from just 18 starts. He was a 2 year old winner, he was a dual Group 1 winner, he was a dual Group 2 winner, and he was the first 3 year old in a decade to win the Stradbroke Handicap. In all bar his first start as a 2 year old which he won by 2 ½ lengths, he raced throughout his career in Group and Listed company amassing over $2.4 million in prizemoney. As a stallion at stud, in his first year he covered 186 mares (including Group 1 winners Jameka and Guelph), in his second year he covered 175 mares, and in 2020 he covered another big book in excess of 140 mares, so that means that there’s going to be plenty of them out there! He was an outstanding sprinter with an outstanding record, he’s a great looker and a wonderful mover with a magnificent pedigree to back it up, and it’s no wonder that buyers are all over him as the first of his yearlings are presented at sales in 2021.

So far this year at the time of writing, his sons and daughters have been presented at the Magic Millions Sale at the Gold Coast, Karaka in New Zealand, and most recently at the Inglis Classic Sale in Sydney. At each sale, the average price of his yearlings has been over $100,000, showing that buyers are well prepared to pay good money for his progeny.

Impending is by Lonhro, the champion racehorse of his era in Australia and a stallion who is one of the country’s most reliable producer of winners. He’s from the Encosta De Lago mare Mnemosyne, whose six wins included the G1 Flight Stakes and G1 Thousand Guineas. Mnemosyne is one of seven winners from as many foals produced by her dam My Juliet (Canny Lad) and has herself produced three Stakes winners, including the highly-promising filly Epidemic (Lonhro).  It’s a family that also includes the outstanding racemare Better Draw, who at stud produced the G1 Golden Slipper winner Full On Aces and his brother Top Of The Pack.

“From any point of view there is a lot to like about Impending,” said trainer James Cummings. “He has so much to pass on, he’s such a strong, well-built colt with a wonderful temperament, a great desire to win and a blistering turn of foot.”

Darley’s Head of Sales Alastair Pulford concurs, describing Impending as a rare find. “When you send a Group One-winning mare like Mnemosyne to a champion racehorse and sire like Lonhro you hope for a result like Impending. He’s the product of two colonial-bred, Danehill-free champions, he’s a great athlete and a great physical specimen. If his progeny inherit his looks and his walk, yearling buyers are going to be all over them.”

This filly, purchased from Book 1 at the 2021 Inglis Classic Sale is a great physical type. Just take a look at the video of her right here:

She was selected for us by John Price who was at the sale buying horses for us, as he usually does, for Grand Syndicates. This filly was his top selection of the sale, an absolute ‘must buy’ in John’s book if the price is right, and whilst it didn’t fit the lower budget we have for Grand Syndicates, it didn’t matter, as we snapped her up to come to Perth to race in the Belhus colours. In addition to her fabulous physique, she’s got a handy pedigree to back it up. She’s from a winning Exceed And Excel mare who’s a half sister to two Stakes Winners, and further down the page, there’s more than enough black type through her pedigree to justify her price.

5% shares are priced at $4,400 which includes the purchase price, transport from Sydney to Perth, and all other costs to March 31st 2021. She’ll be trained in Perth by Martin Allan who’ll no doubt give her-and you-every possible opportunity to get in the winners circle!

And by Impending from Christmas, just think of the naming possibilities!