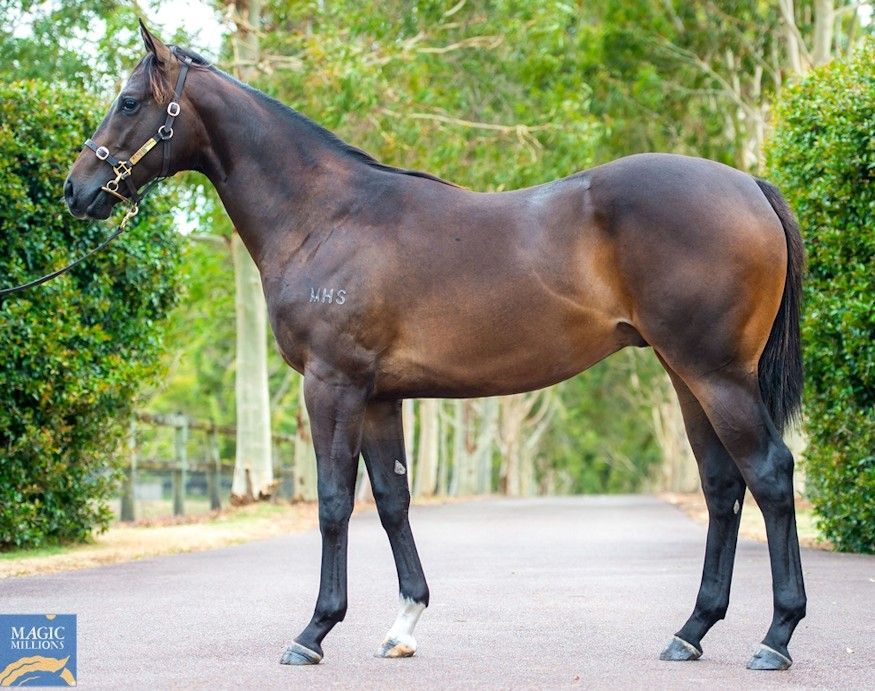 Here’s an impressive looking colt, a real beauty who oozes presence. He’s by a new stallion on the block, SANTOS, who’s a Son of the breed shaper and emerging sire of sires I Am Invincible.

Santos was a fast and precocious juvenile who won the Group 2 ATC Skyline Stakes (1200m), a stallion making race, won previously by Snitzel, Choisir, Hinchinbrook, Manhattan Rain and I’m All The Talk. He commenced stud duties in 2019, and his oldest progeny are yearlings in the 2021/22 season, and have already sold for up to $115,000.

This colt from the 8 times winning mare Khutulun is a ‘beauty’. In fact, that’s exactly the comment I wrote on his catalogue page at the 2022 Perth Magic Millions Yearling Sale. He oozes quality and has a great presence about him. As it says in the vet report in the official syndicate brochure, he’s ‘well grown, strong and athletic’, and to my eye, looks every inch a runner.

On the female side of his pedigree page, there’s black type success through each generation. He’s the first foal of Khutulun, who was a mare I also bought as a yearling. She cost just $17,000 at the Melbourne Premier Yearling sales, and raced for us in the Grand Syndicates colours, and ended up winning just a little shy of half a million dollars. She won 8 races, including 4 in town, and was also stakes placed in the MRC Lord Stakes too. Her pedigree page features the Group 1 VRC Derby winner BLACKFRIARS, who went on to become the Champion stallion in Western Australia an incredible 9 times! She was the first good horse for Grand Syndicates, and whilst as a yearling, this colt doesn’t fit the our smaller Grand Syndicates yearling budget, he sure does for Belhus Racing Stables in Perth, and that’s where he’ll race and be trained by Grant Williams.

This colt is eligible and will be paid up for The Westspeed Bonus scheme, which is very popular amongst owners and trainers in WA, and for a very good reason. Standard prizemoney for a normal Saturday race in Perth (Tier 1) has recently gone up from $70,000 to $80,000 ($43,840 to the winner), but with a Westspeed horse such as this one, the owners receive an additional $16,500 for each Tier 1 race win, meaning a first prize of $60,340! And as if that’s not enough, a recent introduction is the payment of a Westspeed bonus for placegetters too. A Westspeed horse receives an extra $3,300 for second, and $1,650 for third, on top of the normal place prizemoney. That’s very handy and it all adds up!

The concept of horse racing syndicates means that you don’t have to outlay big figures to race quality horses. A 5% share in this horse for example is only $5,830, and once you’ve bought in, all you need to allow is around fifty dollars a week to cover your share of costs. Australian horse racing is the envy of the world. People from all over the globe are clamouring to invest in Australian thoroughbreds and participate in our racing scene, trying to win a share of the fabulous prizemoney on offer. You can do it very easily by taking just a small share in a professionally organised racing syndicate, and in this instance, get your horse trained by absolutely one of the best in the business, giving yourself every possible chance of success.