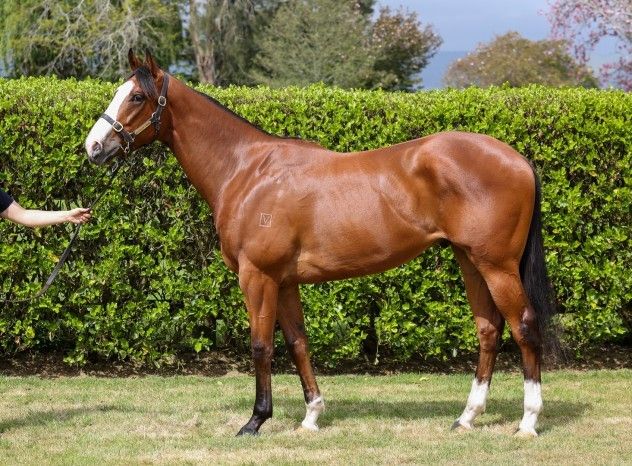 With the intention of getting a Guineas/Derby type of horse to be trained right here in Perth by Grant & Alana Williams, we purchased this 2 year old gelding by Tavistock at the recent 2021 New Zealand Bloodstock Ready To Run Sale.

He’s by the Group 1 winning TAVISTOCK who’s done such a great job at stud having produced over 380 individual winners, and boy oh boy, can he throw a good racehorse. Here’s a few of his best:

The progeny of Tavistock are tough, versatile horses who can win over all distances, but particularly be at their best from 1600m to 2400m.

This horse’s Dam, Sweet Dreams Baby, has produced six to race as a broodmare and all have been winners! Amongst them are the Stakes winners WINDBORNE, who won twice at Listed level, and DARCI’S DREAM who won the Listed Canterbury Belle Stakes and was runner up in The New Zealand 1000 Guineas.

Presented as Lot 322 at the sale, he’s an August foal so is quite forward, is very muscular with a nice bit of length and rein about him, and he stands at 16hh. He breezed up in good time on a Heavy 10 track, and shouldn’t take too long at all before he’s ready to race here in Perth.

As mentioned above, this colt will be trained by Grant & Alana Williams who have enjoyed so much success both in Perth and the Eastern States too. Previously, the Williams Racing stable has predominantly trained for one client, however, Grant and Alana now believe the time is right to change direction with their stable to allow a more diverse client base to enjoy the thrill of racing horses with them, and this colt gives you that opportunity.

This is a 20 share syndicate priced at $3,930 each, which includes the purchase price, transport from Auckland NZ to Perth WA, one month’s agistment, insurance, and all other costs including GST to January 1st 2022. From January 1st, 2022, which to be fair to everyone, is the date that syndicate fees commence for all owners irrespective of sign-up date, our stress free, fixed fees of $220/month paid quarterly by direct debit ($50.27/week) will cover all of your ongoing racing, training, agistment, syndicate management and communications, transport, farrier, and even vet bills too! In fact, with the exception of annual insurance (which is optional anyway) and the possibility of feature race payments (which is a shared bill you want because it means that your horse is good enough to run in the big races), there’s nothing else to pay!  There’s no bill-shock, and you know exactly what you’re up for all of the time.

This syndicate is pending approval by The Lead Regulator.