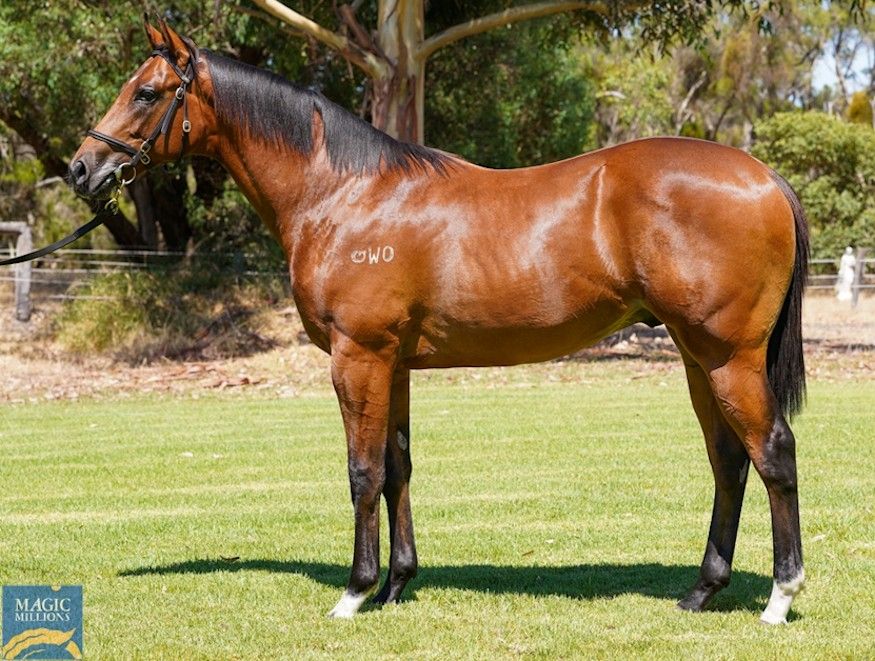 Keen Perth racegoers will know that one of the best winner producing stallions in Western Australia is Universal Ruler. With progeny such as The Velvet King, Lady Cosmology, Bam’s On Fire, Rebel King, Angelic Ruler, Uni time etc, there’s rarely a racing day goes by without the Universal Rulers figuring in the finish somewhere. He’s got a winners to runners strike rate in excess of 61%, and to date has produced 124 individual winners. Just like Scenic, he can produce sprinters and stayers, and they’ve shown that they can run early and train on. The impressive son of Champion stallion Scenic had 5 lots sell at the recent 2022 Magic Millions Perth Yearling Sale, and they averaged $81,000, selling up to $200,000. This colt was the least expensive of the 5 sold, so let’s hope he proves to be the biggest bargain! Certainly with prizemoney as good as it is right now in Perth, and taking into account the Westspeed and Westspeed Platinum Bonus Schemes, all he has to do is win just the one Saturday race in Perth to more than recoup his purchase price!

This colt has a pretty good pedigree page for the price that we paid for him. His dam, Swanky Girl has had 8 to race for 6 winners, his second dam Conifer Bay had 9 to race for 6 winners, as did his third dam Syndare too, so you can see that it’s a family that keeps producing it’s fair share of winners through each generation.

Physically, we rated him as a nicely balanced individual who shouldn’t take forever to get to the races.  He has a good neck and head, correct leg conformation, and a good temperament. He’ll be trained at Ascot by Tiarna Robertson, who is best known for her amazing achievement training the mighty Fabergino. This is the third horse that we’ve given Tiarna to train.

In addition to the Westspeed Platinum Bonus Scheme, this colt is also eligible and will be paid up for the Magic Millions Race Series, (Perth Only) which incorporates the $250,000 2yo Classic and the $200,00 Magic Millions 3yo Trophy.

The concept of horse racing syndicates means that you don’t have to outlay big figures to race quality horses. A 5% share in this horse for example is only $2,790, and once you’ve bought in, all you need to allow is around fifty dollars a week to cover your share of costs. Australian horse racing is the envy of the world. People from all over the globe are clamouring to invest in Australian thoroughbreds and participate in our racing scene, trying to win a share of the fabulous prizemoney on offer. You can do it very easily by taking just a small share in a professionally organised racing syndicate such as this one, and who knows, with a bit of luck, it could bring you some of the best times of your life!

Brochures including the PDS are now available.