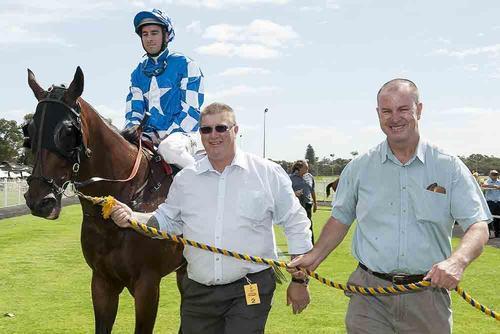 Former Sydney galloper Military Secret notched up his seventh career win and his third in the blue and white Belhus colours when successful at Ascot on Saturday.

Coming off a disappointing unplaced run when tried over 1400m last time out, trainer Trevor Andrews freshened the gelding right up and had him jumping out of his skin for the 1000m scamper. Well supported by his band of loyal owners, Military Secret upheld his side of the bargain by winning at 10/1, not by far, but by enough.

Jockey Shaun McGruddy rode the horse perfectly to win, and has now ridden him twice for a perfect strike rate-two from two! Trainer Trevor Andrews indicated that he’ll now look for a similar journey when plotting his next race, which, all being well, should be on the opening day of the new season at Belmont Park..