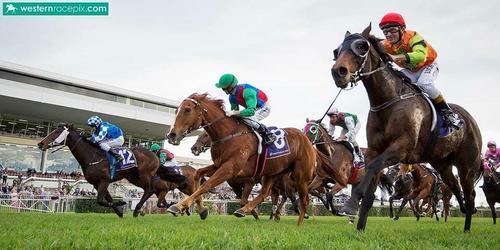 Minimalist (furthest from the camera) continued on with his impressive recent resurgence of form to claim the final of the Skyracing.TV Provincial Championship at Belmont Park on Saturday.

Already a heat winner of the Provincial Championship at Pinjarra earlier in the month, once again he was sent out at big odds and once again he came with a wet sail to claim victory by a narrow margin. In fact the photo finish was very close with the first three horses over the line all being credited withe the same time!

Winning trainer Ivan Haggerty explained that Minimalist has been a very difficult horse to train and has caused him plenty of headaches during a form slump earlier this year. However, plenty of thought and trying a few different things has paid dividends, and according to Ivan, ‘letting him think he’s the boss is the key to keeping him happy’.

Minimalist has now won 3 races from his 30 starts which has grossed just short of $75,000 in prizemoney. Still only a 67 rated horse, that gives him plenty of opportunity to add to his tally as he continues his rise up through the ratings…