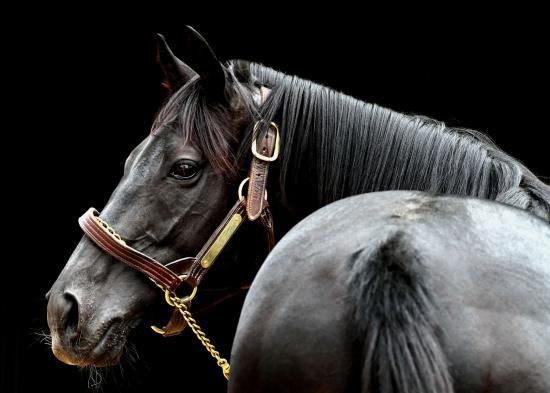 While the impressive looking stallion had his very first winner recently courtesy of the Darren Weir trained ‘Navy Blue’, he was left without a stud following the closure of Jindera Park north of Albury.

An incredibly versatile racehorse, and a son of the great DANSILI, Illustrious Blue proved himself to be tough and durable having raced until eight, recording ten wins, ten seconds and seven thirds, earning $883,084 in prize money. He won five races at three, all on prominent English tracks ranging from 1400m to 1800m. The two biggest successes of his career were at historic Goodwood, in the Group 2 Goodwood Cup over 3200m, and the Group 3 Glorious Stakes over 2400m. He also won the Group 3 Sagaro Stakes at Royal Ascot and was a first-up winner over 1777m in Dubai too! Towards the end of his racing career, Illustrious Blue campaigned in Australia, competing in five Group 1 races and was a top ten finisher in Americain’s 2010 Melbourne Cup.

“He’s a correct and very well balanced stallion that will suit petite mares” ‘’Gorman said. “He actually reminds me of Bletchingly. Although not a sprinting type, he wil pass on his amazing versatility. His temperament is just brilliant, and he’s lovely to handle and do anything with”, O’Gorman said.

From the small number of Illustrious Blue progeny to have begun their racing careers, Darren Weir’s Navy Blue became his first winner, with promising progeny also in the stables of Cranbourne trainer Robbie Laing and Caulfield’s Luke Oliver in Victoria, while quite a few of the progeny of Ilustrious Blue have been placed in New South Wales and Western Australia too.

“As he’s only covered limited numbers of mares in his first few seasons, it’s tough for him to be commercial, but with his racetrack performance and pedigree, he is a beautifully bred Danehill line stallion option for the owner that is looking to race. For breeders, their patience will be rewarded, as Illustrious Blue will produce both quality middle distance and staying horses” O’Gorman said..

Illustrious Blue will stand for $2,500 (no gst) alongside Glen Eden’s other new stallion Scintillo. For more information, contact Sonia on 0407 811 411 or visit www.gleneden.com.au