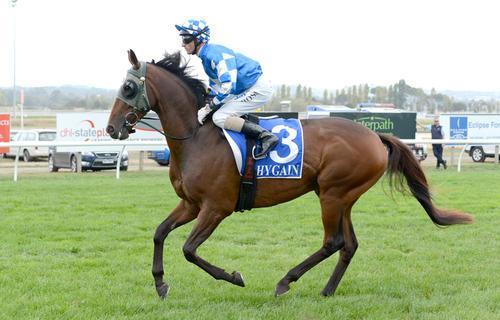 It’s with deep sadness that we advise of the passing of Elms who had to be humanely euthanized after fracturing a cannon bone during a race at Casterton. It’s no good saying that Elms was one of our favourites, because all of our horses are our favourites. We love them all.  OK, well I’ll admit it, I do have a personal favourite right now and he’s an 11 start maiden! He hasn’t won a race yet, and he’s cost us tens of thousands of dollars to get this far with him. But I love him, and I’m pretty sure he loves me too. I wake up to greet him every morning, I look after his every whim, we go to the track together three times a week, and on the way home when we stop off at the local shop, I have my regular bacon sandwich, and he has a handful of liquorice allsorts!  We’re just great mates. And if he doesn’t win a race, it doesn’t really matter you know. Because I’ll still take the time and do whatever it takes to find him a good home in some other equestrian activity that suits him better-just as I’ve done on dozens of other occasions..

It’s fair to say that all of the horses under our management are looked after as best as we possibly can. We adore them from the very first time we see them at yearling sales, we visit them and give them a loving pat and a cuddle on stable inspection days, and we go to the races to cheer them on. They receive the best veterinary attention should they need it, they’re rugged when it’s cold, they’re hosed down when it’s too hot, they’re exercised daily and fed the best that’s available. Our goal is to have happy, healthy racehorses.

Needless to say though, it’s devastating and painful for us when we lose one of our horses, but I must say from a personal point of view, that it’s made even more painful when people accuse us of being cruel-even to the point of twisting our heartfelt words and making a public demonstration about it. For a fleeting moment on Elms last day, I listened once again to their outcry of disgust aimed at the entire global horse racing industry and wonder if maybe it’s they who are right, and it’s us who are wrong. Should we do as they say and stop breeding racehorses, raising racehorses, and racing racehorses?  If what they say is right, then let’s not breed racehorses at all. Let’s not create that life, and let’s not have the chance to love and show affection to our horses-and hope that we get some back-should they choose…

And then, just as swiftly as the nanosecond or so it took for me to consider whether what they were saying is right, reality set back in. After all, isn’t it right that all domestic animals in the care of humans are at risk from some sort of trauma. Whether it be someone’s pet dog being attacked by another dog or being run over by a car, a horse being kept for occasional riding going through a fence in a thunderstorm, a fish in an overcrowded aquarium dying from white spot disease, or a canary suffering mental stress from being kept in a small cage-all are unfortunate cases of animals being at risk in some way or another whilst kept by humans.

I admire people for speaking up about what they feel passionate about, after all it’s all part of the benefits of living in a democratic society. But I cannot for a moment understand why people appear to be waiting with cameras for a horse to fall in a race, just so that they can glorify and further their cause. To me, it’s a very callous thing to do. If they were speaking out about bile being farmed from bears trapped in tiny cages not much bigger than they are, or elephant poaching or organised dog fighting, then I could understand it-and I’d support them wholeheartedly. But that might be too hard for them. The targets aren’t easy enough.

So, are those that oppose horse racing right, or have they got it wrong? I like to think of myself as a fair man-one who can consider both sides of the story, and so to ponder that question and also to continue my own personal grieving process, I went out and asked some of my best friends. Without exception, each and every one of them came up to me and wanted a cuddle. They knew something was wrong, They realised I wasn’t singing-which is my usual status when outside with them. It’s funny how they know something’s wrong isn’t it?  Usually they hang around because I treat them on a daily basis with a pocketful of carrots. Today though, there were no carrots, but each and every one of them still stayed around as if to comfort me-because they realised that I was upset about something.

I love my horses. I love my dogs, and I can even put up with my cat too on the odd occasion. After 30 years working with horses, I still marvel at their spirit, athleticism and beauty every single day-and I just want to be with them. Most others I know in the racing industry feel the same way. And I hope you do too…