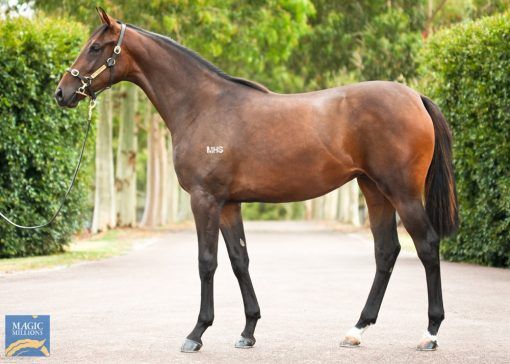 Of all the yearlings that we’ve purchased this year between Belhus Racing Stables and Grand Syndicates, I’d rate this filly right up there as the best value amongst them.

For what we paid for her, she looks like she could be another of our sales ring bargains. A very good athletic type with an elegant stature, she’ll mature into a great looking mare...

She's by GOLD STANDARD from a 3 time winning More Than Ready mare. At the various yearling sales that we’ve attended this year, I’ve been quite taken by the physical qualities of Gold Standard's progeny, and in fact I’ve bought two of them, a colt for Grand Syndicates, and this filly for Belhus Racing Stables here in Perth.

She’ll be trained by Martin Allan, who has stables directly opposite the 1600m start at Ascot. Martin’s a very good educator of young horses, has a good winning record with his horses, and has proved to be very popular with our owners. There’s no doubt in my mind that Martin will be giving her-and you- every opportunity to get right where you want to be-in the Winners Circle!

This is a 20-share syndicate priced at $1,895 each, which includes not only the yearling sale purchase price, but also all other associated costs right through to July 1st, 2021, which, to be fair to everyone, is the date that syndicate fees commence for all owners irrespective of sign-up date.

This syndicate is pending approval by The Lead Regulator... 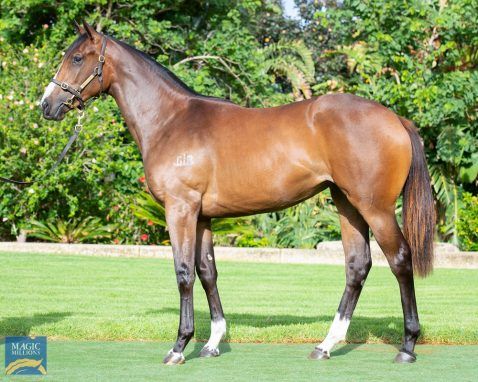 Here’s a nice filly by the Fastnet Rock stallion AWESOME ROCK. A winner of over $2,000,000 in prizemoney, Awesome Rock was successful at the highest level  taking out the Group 1 VRC Emirates Stakes, as well as the Group 2 Dato Tan Chin Nam Stakes too.

The first progeny of Awesome Rock are now starting to hit the tracks, and at the time of writing, he’s had just four runners for a city winner in Kaymay and a stakes placed horse in Diamond Blue. Now that’s a great start!

This filly is from an unraced Husson mare, and hails from a family which includes the Group 1 winners RECURRING and LADY MADONNA. Whilst her first and second dams have only had 3 foals between them, deeper in the pedigree her third and fourth dams have had 17 to race between them for 16 winners! She’s a good, athletic type, and she caught our eye at the recent on farm inspections prior to the Magic Millions Perth Yearling Sales where we were lucky enough to be able to buy her.

The share price is $2,377 per 5% share and has been projected forward to the end of June 2021 to include the auction purchase price, agistment, breaking in, insurance, the Westspeed Bonus Scheme, and all other costs including GST.

This syndicate is pending approval by The Lead Regulator.
Detail Enquire

Here’s a nice colt with an athletic physique, a great temperament, and from the family of one of Australia’s best sprinters in GYTRASH! Physically, he’s a strong, correct, early running type by the right stallion to get you in the winners circle. ORATORIO has been such a prolific winner producing stallion over the years here in Western Australia. He produces good jump and run types that can win in their juvenile season and then race on and win as older horses. Think of quality gallopers such as LUCKY STREET, MOTION PICTURES and GOLD ROCKS all of whom won the Group 2 Karrakatta Plate, and then throw in CLUELESS ANGEL, WARATAH’S SECRET and MISTY METAL among Oratorio’s 258 individual winners too, and you can see that he’s been, and continues to be a potent source of prolific winners in Western Australia.

The share price is $5,500 per 5% share and has been projected forward to the end of June 2021 to include the auction purchase price, agistment, breaking in, insurance, the Westspeed Bonus Scheme, and all other costs including GST.
Detail Enquire 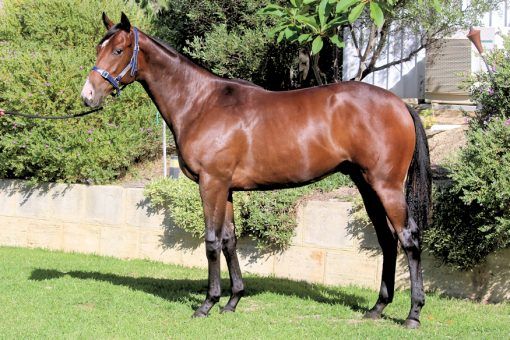 Here's an athletic colt with plenty to like about him.

He's by GINGERBREAD MAN, and what a good winner producing stallion he is. On the racetrack, he won an impressive 11 races including The Singapore Guineas, and importantly, at stud, he's demonstrated time and time again that he can produce a quality racehorse-and that's what we all want! Think of the Karrakatta Plate winner I’M A SINGLE MAN, the excitement machine RED CAN MAN, and the quality gallopers ACHERNAR STAR, ESSENTIAL SPICE, and NEUROLOGICAL too, and you get an idea of the sort of quality galloper that Gingerbread Man can produce.

This colt’s successful pedigree backs up his athletic physique. He’s got good leg conformation, strong shoulders and hips, and big hindquarters. He strides out nicely with a confident walk and he looks every inch a runner. It’s no wonder that he was popular at the sale. We’re delighted to have secured him to race in the Belhus colours, but even more delighted to have him trained by Martin Allan.

The share price is $5,500 per 5% share and has been projected forward to the end of June 2021 to include the auction purchase price, agistment, breaking in, insurance, the Westspeed Bonus Scheme, and all other costs including GST.
Detail Enquire