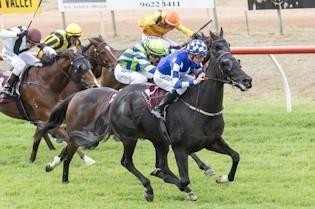 Belhus Racing’s West Australia-based Apollo finally put it all together with an overdue win in the Gannon’s Racing Colours Maiden (Race 2-1300m) at Northam today.

The Trevor Andrews-trained four-year-old was primed to produce a peak performance at his third run back from a break and the eastern-states import delivered the goods, coming from a rearward running position to record a comfortable win for top jockey Jarrad Noske.

Apollo, who was originally raced by Hall of Fame trainer Chris Waller in Sydney after being purchased for $500,000 at the 2013 yearling sales, has shown plenty of potential since crossing the Nullabor over 12 months ago and gives the impression he can go right on with the job now.

A handsome son of champion racehorse and in-demand stallion So You Think, Apollois a half-brother to multiple Group 1 winner and $1.44 million stakes earner Cosmic Endeavour, and while he still has plenty to learn the Trevor Andrews stable are confident he can develop into a more-than-handy competitor, especially when he steps up to distances over a mile and beyond.