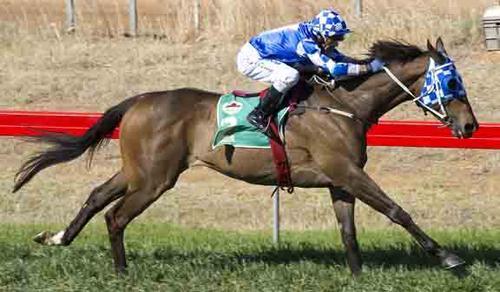 Normally a safe driver, veteran jockey “Dashing” Danny Miller will have his right foot firmly on the accelerator on Saturday when he dashes off after riding in race 3 at Belmont Park to make the Toodyay meeting about an hour or so away where he’ll be legged aboard the favourite The Moon Day (pictured) in the Toodyay Cup.

The Avon Valley track is expecting a big crowd for its annual meeting which was not run last year due to the devastation caused by the Toodyay fires which burnt down some of the facilities at the racecourse. Millers mount has drawn the inside barrier and will start the favourite in the Cup, and after a close third last time out at Northam when leading for most of the way, his trainer Peter Morley is confident of success. “It’s quite a tricky track to ride and some horses handle it and others don’t. Dan is one of just a few jockeys riding at the meeting who have been around the track before, in fact, he was riding winners there before most of the other jockeys in the race were even born” Morley quipped. “Having Dan on board is a huge advantage. If the horse handles the track, he’ll win -simple as that”.