Early Running Type To Be Trained at Ascot by Trevor Andrews! 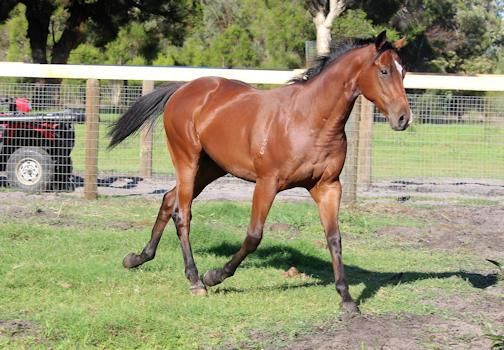 At the 2017 Magic Millions Perth Yearling Sales, I targeted just one horse-this horse-and was lucky enough to buy him for not a lot of money.

Trainer Trevor Andrews had already seen the colt at his pre sale inspections at the various stud farms, and because I’d told him that I was looking for a nice Perth yearling, but didn’t want to spend a lot, he pointed me towards this horse. The racy young colt took Trev’s eye as soon as he saw him, and as he explains, he’s a precocious looking type and definitely a chance to run early, which means that as owners, we shouldn’t have to wait forever to get him to the races. Trev wants to resist gelding him and keep him as a colt so that he can put plenty of early work into him and get him ready for races such as the Perth Magic Millions and the Karrakatta Plate in 2018.

The colt is by PLANET FIVE, a beautifully bred Stakes winning son of the World Champion stallion STORM CAT. A Group 2 winner in France who’s stood with moderate success in WA, it’s fair to say that PLANET FIVE isn’t in the top bracket of stallions here yet, but that’s why our colt was only twenty odd thousand and not forty or fifty thousand, or even more. Having said that, Planet Five has produced winners such as The Celt who’s won over $160,000 and Diamond Tonique who’s won over $100,000, in addition to Forbidden Planet (4 wins), Size Fivez (3 wins), Laurensen (2 wins) and Stellar Ignition who at the time of writing has won his last two starts including at Ascot on March 29th as an odds on favourite.

Interestingly, at the Magic Millions Sale, the progeny of Planet Five sold up to $42,000 and were purchased by trainers such as Ben Pearce, Brent Larson, Dion Luciani, and of course Trevor who in fact purchased 3 yearlings by the stallion (this one on our behalf) so he obviously thinks they’re a good chance.

Looking at the colt’s pedigree, there are 9 Stakes performed horses on the page and all but one are horses well known to Perth racegoers. Stakes winners such DANCING PAGO, ROCK MY PAGO and PAGO ROCK are all good sprinters close up in this colt’s pedigree, and further down the page we see it’s also the family of the very good filly SHOWY CHLOE who won the Sires Produce Stakes and was placed in the Gimcrack Stakes, Supremacy Stakes and the Karrakatta Plate as a 2yo.

The colt’s dam Shake Shake Shake was a short course winner herself and as a broodmare she’s had two to race and both have been winners.

So, overall as we look closely at the pedigree, we see that it’s a pedigree that throws up two year old winners, is dominated by sprinters, and has a good degree of success. The colt is a beauty, he’s a natural looking runner, he’s been personally selected by Trevor Andrews who’s proven over decades that he knows how to select and train young horses having trained the winners of 2 Karrakatta Plates, 2 Sires Produce Stakes, 4 Magic Millions 2yo classics, 3 WA Guineas and 3 Derbies too! It’s fair to say that there aren’t too many other trainers in Perth that can even come close to that level of achievement!

You can register your interest in this colt now. Details including the all important PDS will be available soon..