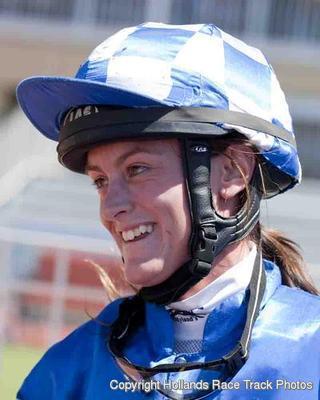 Apprentice jockey HAYLEY DIENER was all smiles as she proudly notched up city win number three during the week when she was successful on Xaarphonic at Ascot on Wednesday.

Like most apprentices. Hayley is putting in the hard yards right now with a policy of ‘have saddle-will travel’. She’s a regular on nor west and southern region tracks, but loves nothing more than staying in town if there’s the chance of a decent ride.

Indentured to the wily old Ascot based trainer George Daly who has a wealth of racing experience, Hayley rode her first city winner on the Boss’s horse Vizard at Belmont Park earlier this season. She’s followed up with wins on It’s Judgement Day and now Xaarphonic, and I’m thrilled to say that the latter two are both Belhus horses! Interestingly, two of Hayley’s city winners have both been on a day when she’s had just the one ride for one winner!

I can see Hayley getting better and better as each week passes, and her whip action is now almost second to none. Anyone viewing the head of Xaarphonic’s win would think it was ‘The Pontiff’ himself riding!

Knowing her background, and having played a small part in her fledging career thus far, I’m thrilled to see Hayley achieve success in her choosen field. Importantly though, as clients of Belhus Racing Stables, you-our owners-are also directly playing a part in the success of this young achiever…