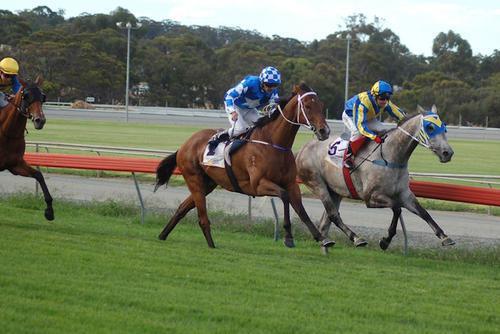 In what must surely rank as one of the most enjoyable days at the races I’ve ever had, Henry The Pharoah notched up his sixth victory when he got home to win the sixth race on the programme by a very narrow margin!

Once again, it was Henry at his wiley best as he did everything in his power to try and not win the race. Fair dinkum this horse knows more tricks than David Copperfield. From a wide barrier, the very much under rated (by others) Peter Black soon had him in the box seat which meant he had three horses to chase which is good for Henry.  It was pretty obvious he was going to be in the finish one way or another, but he had us all standing and cheering in the last 100m. Peter kept him on the straight and narrow and urged him to the line to win by the smallest of margins-a nose (1/100th of a second). Pete’s comment on returning to scale was that he should have won by five or six lengths, but we all know Henry likes to run alongside his mates and have a chat in the run to the line!

The day was one to remember for Muchea trainer Fenella Martin and her husband Jeff as they savoured their first ever double after also winning the opening event on the day with Black Coat. From a personal point of view, it was terrific to share their excitement and hospitality (I hitched a lift down in their truck), and there’s no doubt that they’ll be training many more winners in the near future!