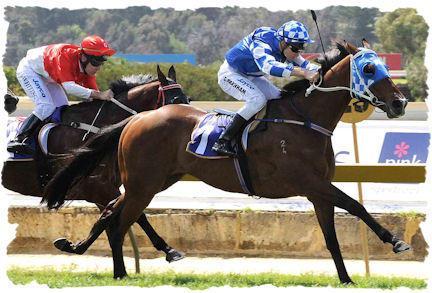 Seven year old Henry The Pharoah was on his last chance today with his owners, but, as if he knew the ‘score’, he redeemed himself and won easily.

The genius of the much under rated jockey Peter Black was again on show in the Belhus colours when after jumping smartly from the outside barrier, he had his mount on the rails and smoking a pipe behind the leaders after just 200m!

Blackie had the race won a long way out, and at the top of the straight it was just a matter of how far he was going to win by.

Pete had just the one ride on the day for one winner, so it was a big day for him. Equally so however, it was also a big day for trainer Fenella Martin as Henry’s win today was her first provincial winner since starting training just last year.

Special mention must also be made of owner Merle Turner who was the only original owner of Henry to stay the course with him. She’s followed his every run up to to todays win and took great enjoyment from today’s win. It certainly made the long drive from Serpentine to Northam well and truly worth it!