He’s A Sprinter, He’s A Miler, And Now He’s a Middle Distance Performer Too! 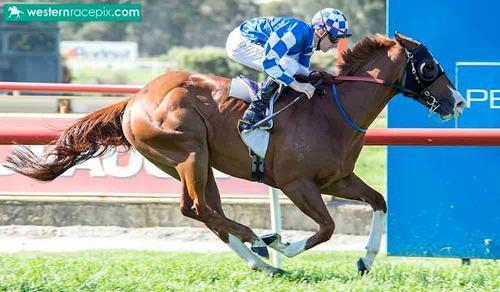 PASEO DEL PRADO had his owners cheering when once again he proved his versatility at Belmont Park last Saturday by defying all challenges thrown at him to score a convincing length and a half win in a competitive 2100m race.

Aided by an absolute copybook ride by apprentice Joe Azzopardi, Paseo Del Prado defied all challenges in the straight to eventually win pulling away by a length and half. Starting a clear cut second favourite, he looked slightly vulnerable after turning for home when his opponents got to his flanks, but the apprentice got the best of his horse and at the furlong post it was all over.

The ride by Azzopardi really does deserve special recognition as it was a pearler. He get his mount in the box seat, didn’t go too early, waited for exactly the right time, and then got everything that was needed out of the horse to win by a comfortable margin.

As you can see from the winning photo, Paseo Del Prado is one of the most recognisable racehorses in Perth, the flashy chestnut’s looks matching his ability!

Since arriving in Perth after our purchase of him from NSW, he’s won over 1200m, 1400m and 2100m and has the record of 3 wins and 6 placings from 12 starts in the West. A real moneyspinner, he’s finished in the first 4 at ten of those twelve starts and he sure is giving his owners a very memorable ride!