MAKE ME A SILLY OFFER ON ONE OF THESE SHARES! 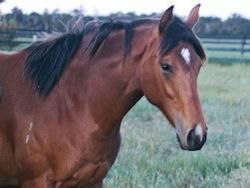 I’ve got an owner of this horse that desperately needs to sell his share so if you make me a silly offer, I’m sure he’ll consider it!

A high quality 2yo filly by Western Australia’s Champion stallion, she’s been broken in, spelled and is now ready to start back in work with a view to getting to trials and hopefully the races in the next few months.

This is one of the most physically appealing fillies we’ve ever had the privilege of breeding and/or selling!

An early August foal, as you’d imagine, she’s well developed and very forward. She’s being retained by the majority of her owners to race-but there are 2 x 10% shares available.

BLACKFRIARS is the current Champion Western Australian stallion. A winner at the highest level himself (he won the Group 1 VRC Derby), as a stallion he’s produced nearly 200 individual winners (10% stakeswinners) including the very talented racehorses PLAYING GOD, GOD HAS SPOKEN, ROHAN, ECLAIR SURPRISE, POP CULTURE, the tough as teak ROSIE’S ROCKET (wouldn’t you like one as good as her) etc…

This filly is the second foal of the dam Aquamaze. Her first is a 3yo gelding (full brother) which has also been bred and the majority retained in exactly the same fashion as this filly.

The asking price on a 10% share is $4,000 but the owner needs to sell and so if you make me a silly offer, I’m sure he’ll seriously consider it!

PS. You can also send me an offer on a smaller 5% share too as that’s easily arranged….