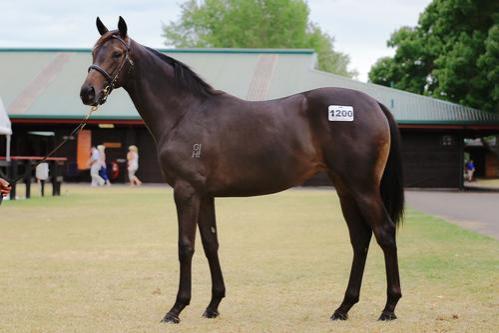 When i first saw this filly, there’s no doubt that it was love at first sight! This is a fabulous filly and I’m very excited!

At this years Karaka Yearling sale series in New Zealand, I inspected every yearling by the stallions who interested me and this filly was the ONLY ONE who absolutely took my breath away on first glance!

In my business, it’s prudent to make a judgement on first season stallions and try to pick a good one before they come out and start winning as two year olds-and then the prices go up in the second year. Just like in 2014 when I went to NZ to buy a ‘Showcasing’ (I got that one right as he’s now the Leading Sire of two year olds in both the UK and NZ), this year I went to look at the progeny of Redwood.

Redwood has all the attributes required to become a succesful stallion. He was brilliant on the track winning at Group 1 level (on turf) in America. He won the Group 3 Glorious Stakes at Goodwood, he won a Listed race at Newmarket, and to cap off a truly international career, he was also placed in Group company in Hong Kong, Dubai, France and Canada too!

To back up his obvious talent, Redwood also has a real stallions pedigree. He’s by the English Derby winner High Chaparral who has also produced the high class racehorses and now stallions in their own right So You Think, It’s A Dundeel and Monaco Consul. His second dam Jolypha was the Champion 3yo filly in France winning twice at Group 1 level, and his third dam Navajo Princess won 4 Group and Listed races in America and at stud produced the incredible Dancing Brave who became the Champion 3yo of Europe in his year (1986) winning no less than 4 Group 1’s on his way to becoming a champion stallion himself. A how about that?

This filly’s dam Sun Chariot was a Sydney city winner who’s only two previous progeny have both raced, they being Auto Pilot who’s been a city winner in Adelaide, and Moonlighting who’s been placed twice on Sydney city tracks. Sun Chariot is a half sister to Super Satin who won 6 races including the Hong Kong Derby, and also featuring in his family is the Irish Group 1 winner Spartacus.

She’s a stunning looking filly and I’m keeping her in NZ to be trained by Graeme Rogerson who will set her for the Karaka Millions in 2016 with the understanding that if she shows enough ability, she’ll co,e to Australia.

Your expressions of interest are invited on the filly. 10% shares will be around the $4500 mark…