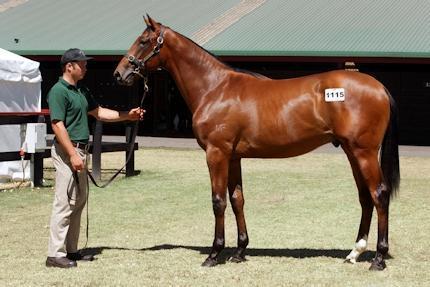 In an attempt to counter all these expensive European imports that are flooding our shores of late, I went to New Zealand earlier this year to look for a good old fashioned Kiwi staying type. Remember those? Horses like PHAR LAP, TULLOCH, KIWI, BONECRUSHER, DARCI BRAHMA, SO YOU THINK, MUFHASA, ETHEREAL, MIGHT AND POWER, DORIEMUS-you get the idea. We can all dream-it’s what keeps the game going…

Without a big budget to spend I had to be pretty selective, but encouraged by the knowledge that a Champion like Bonecrusher was purchased in New Zealand for just $3,000, and the Melbourne Cup winner Kiwi purchased for just a third of that (I’ll have two of those please..), I was bouyed with enthusiasm!

As travellers before me would no doubt have found out, when one lands in New Zealand for the first time, the language differential slaps you right in the mush like a ‘sux’ over ‘mudoff’ from Sir Richard Hadlee (obviously when he was playing aginst the Wust Undies). Yes, they officially speak English, but by God you have to concentrate to ictually understand ut! The first thing I heard when I got off the plane was an announcment that welcomed passengers on flight QF sux sux siven (no joke!) from Sudnuy!

As an Aussie, you just gotta smile when you hear the KIwi’s talk, however, as a well behaved visitor to the Shaky Isles, I decided to blend in (when in Rome and all that) and basically took the easy way out and just added ‘Bro’ to the end of every sentance.

So there I was sitting in a baaa in Nu Zillund with a handle of speights (WTF?), mussing ma cuds and hopin that I hadn’t left the guess on…No, seriously, that’s not what happened, but nevertheless, I couldn’t wait to order the obligatory ‘fush un chups’ and use ‘sux’, siven’ and ‘tin’ as often as I could, whilst at the same time, seizing every opportunity to talk about cricket but at the same time avoiding all talk of Rugby of course (cos they’re pretty good at that) Bro…

And so it was off to the Karakka Yearling Sales just south of Auckland, which must be the most fabulous sales centre anywhere in the World. After three days of inspection, I ended up buying not one, but two colts. The first of them, which I bought under the Grand Syndicates banner and paid $10,000 for, was sent straight to the Melbourne stables of trainer Robbie Laing. The second one however, is our stayer- our project horse if you like-an outstanding colt by the dual Stakes Winning racehorse and now NZ domiciled stallion, SHAMOLINE WARRIOR.

Although not having the pedigree page of much more expensive horses at the sale, I bought this colt because he’s such a super type. He was exactly what I went to New Zealand to look for-a tall, strong yearling with plenty of scope about him and with correct conformation too. I’ve seen PHAR LAP in the big glass box in the museum and I wanted one just like him, and on looks, I found him! Check out his video by clicking on this link:

OK, so our new horse isn’t a ‘blue blood’, but isn’t he a good looking atheltic type (I did mention that earlier). For the budget I had to work with, you won’t get one of them.  What you will get though, is a super looking thoroughbred, a real athletic type, but without the princely relations. Go on, check out the video if you haven’t already..

To this colt’s credit, there is actually a history of stayers right throughout his pedigree. He’s by a stayer who won the Norman Robinson stakes, from a stayer who’s already thrown a stayer, and interestingly, he’s from the family that has produced CEDAR MANOR who also won the Norman Robinson Stakes too (!!) in addition to grand campaigners such as the Group 1 Epsom Handicap winner RIVERDALE (who also won to 2200m) and RUY LOPAZ who won the Stayers Cup (2400m) in Sydney as well as running second in the Turnbull Stakes at Group 2 level.

And I was pretty pleased about all that…

Interestingly, before this horse had even returned to his barn after going through the sales ring, one of the legendary trainers in New Zealand and Australia for that matter too, Graeme Rogerson came up to me and told me what a nice horse I’d bought. He asked if he could train him, explaining that he really liked the colt, he knew the breeder very well, and said that we should let him continue growing in New Zealand, try him out there, and if he’s any good and he shows that he might be up to some good races, then we should take him to Australia to race. It sounded like a plan to me, and anyway I felt a bit flattered, and so that’s exactly what’s happening with him. It’s the least I could do for such a handsome specimen….

The fall of hammer price on the colt was NZ$8,500, and after incorporating a few acquistion costs such as travel expenses, insurance, vet inspections, transport to Hamilton and agistment post sale etc, the horse owes me as near as damn it to $10,000 Aussie plus GST. And that’s all I’m asking for him.

So, if you fancy owning a share in a horse that’ll be trained in New Zealand by one of the best in the business, who’ll hopefully come to Australia to race later on if he proves good enough, then send me $1,100 and you’re in for 10%.