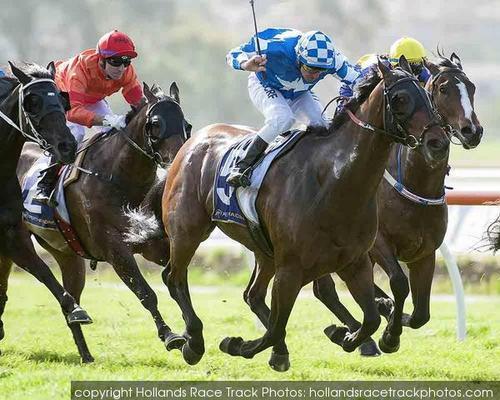 Military Secret certainly pulled one out of the bag at Belmont Park on Wednesday when he stunned almost everyone on course with a dramatic last to first victory after missing the start by 4 lengths!

There’s no doubt that he’s wowed us all with his breathtaking wins of late, and he’s certainly had us cheering him on from the grandstand, but his effort at Belmont Park on Wednesday had us all grasping for superlatives to describe his outstanding effort.

Racing in Saturday class company at the meeting postponed from the weekend, Military Secret was sent out as the best backed horse in the race but shocked his followers after missing the jump by 4 lengths. Now, normally in a 1000m scamper, that’s the end of the ball game, but with top jock Paul Harvey on board, Military Secret quickly tacked on to the field and after turning for home, Harvey guided him through the middel of the field and under hard riding got up to win by a hort neck.

It was an amazing effort from both horse and rider, and once again, another outstanding effort from trainer Trevor Andrews who turned the horse out looking in magnificent order on the day.