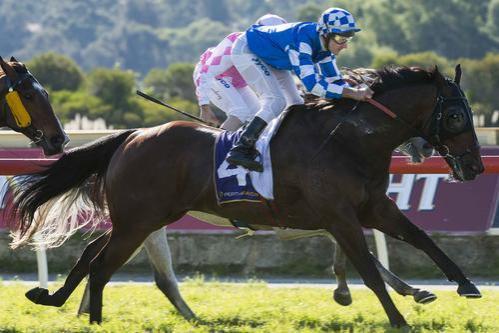 Just like a very good bottle of vintage wine, our six year old gelding Military Secret just keeps on getting better and rewarded his owners with another city win at Belmont Park on Saturday (June 29th). With regular rider Shaun McGruddy out on a short stewards enforced ‘holiday’, top jock Paul Harvey stepped in and proved an admirable replacement. Settling the gelding second last in running, he brought him to the outside after turning for home and the pair came with a determined run to overhaul the favourite Grey Cheval and win eased down by a length or so.

The win was Military Secret’s third win in his last six starts, his ninth of his career and his fifth since being purchased by Belhus Racing Stables back in October 2010. In additon to those five wins he’s been placed on a further 7 occasions too.

Interestingly, the win was very special for our newest owner ‘Flake’ O’Conner who bought into the horse just the day before the race. A keen follower of jumps racing in Ireland, it’s the 28 year old Civil Engineers first venture into racehorse ownership in Australia and it took less than 24 hours to record his first Saturday win! Now that’s the luck of the Irish-to be sure to be sure!