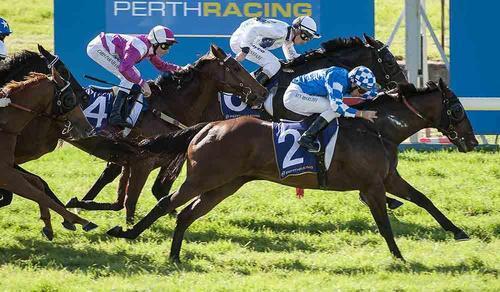 Our 6yo gelding MILITARY SECRET (pictured) won again at Belmont Park on Saturday (May 25th) bringing up his 8th career win and his fourth whilst racing in the blue and white Belhus colours.

Ridden once again by one of Perth’s top hoops in Shaun McGruddy, the win took his record on the horse to 3 wins and a second from just 4 rides!

Trainer Trevor Andrews said before the race that the horse is ‘in the zone’ right now and he continues to work well even though this was his 10th start in this current campaign.

Part owner Carl Ferguson got his long awaited opportunity to finally lead one of his horses back to scale after a city victory and he was ecstatic after the win, and even more so after collecting his winnings from his bookie! The champagne and beer flowed freely after Military Secret’s win and there’s no doubt that the owners are really enjoying their ‘time in the sun’. Notable absentees from the post race celebrations at the track were part owners Geoff Baldwin and Chris Thrift who both listened in from overseas…