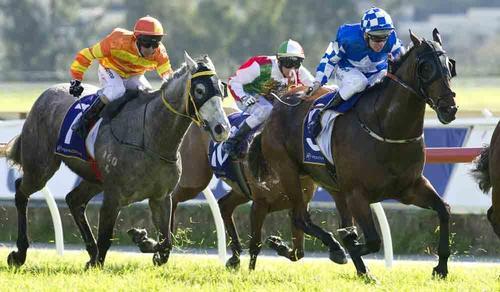 MILITARY SECRET finally chalked up a win in the west when successfull at Belmont Park on Saturday.

Trained by Trevor Andrews and ridden the perfect race by Shaun McGruddy, Military Secret obviously appreciated the addition of blinkers to his gear as he raced prominently from barrier rise, and positioned up close behind the leaders approaching the turn before extending strongly in the straight to win narrowly from the well performed race favourite Texan.

The win was Military Secrets first for Andrews but the second for the syndicated group of owners as he won for them immediately after his purchase nearly two years ago. The long time between drinks was made more bearable though as a couple of times he’s paid in excess of $10 for a place on the tote!  Saturdays win was yet another example of the value punters get following Military Secret, as he paid over $30 on the various totes!

A sound horse with plenty of depth to him-and with age firmly on his side, there shouldn’t be any reason why punters can’t keep making a profit following Military Secret….