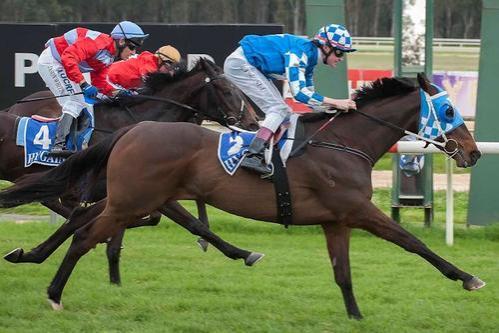 Relatively new to our team, MINIMALIST notched up his first win for us whn winning at Pinjarra on Thursday August 28th.

Having just his fifth start in the Belhus colours, and after having had some less than average luck at his previous starts, the son of Celtus powered home from 9th on the home turn to win easily in the end by 3/4 of a length.

Jarrad Noske deserves a special mention just for getting on the notoriously fractious horse, never mind winning on him. He’s a real nutcase when the jockey goes to get on and it’s not a job for anyone without nerves of steel. Jarrad handled the job well though and then went on to ride a terrific race getting home from ninth on the corner to win like Kingston Town.

On the strength of what we’ve seen so far, it’s fair to say that there should be many more wins in store for Minimalist-especially as we get him over more ground…..