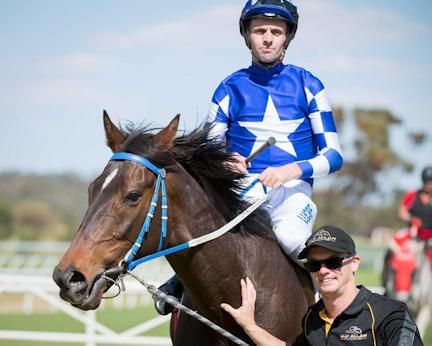 Dyed in the wool stayer Navy Blue came up trumps when he won the 2200m staying event at Northam on Wednesday by an impressive 2 ½ lengths.

Plagued by bad luck at almost every start in this campaign, the good looking son of the tough English imported stayer Illustrious Blue made no mistake on Wednesday due almost entirely to a well planned and well executed ride by the equally tough imported English jockey Ryan Hill. Hill cuddled up Navy Blue on the rail and used the cutaway to devastating effect at one time skipping six lengths in front half way up the straight. He eased down on Navy Blue over the last little bit and had plenty in hand close to the line to win easily.

Trainer Martin Allan was quick to praise both horse and jockey, and he himself deserves an equal amount of praise for the way that he presented Navy Blue in outstanding condition at the races today.

Navy Blue’s sire Illustrious Blue has only had a small number of runners to the races and is steadily proving himself as a producer of stayers. Navy Blue now joins Deep Purple as a multiple winner, both winning over 2200m and further…