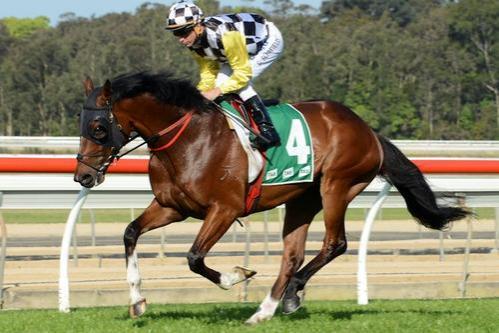 Solar Sky is a 5yo gelding by Pendragon and was formerly trained in Sydney by Bart & James Cummings before being purchased by us in mid October.

A typical example of Bart Cummings’ well known mantra – ‘patience is the cheapest thing in racing’, Solar Sky has been shown plenty of time and has had just the five starts and has gone good each time.

Shaping up as a prospective staying type, his first three starts were over shorter sprint type journeys where he finished 4 1/2, 3 1/2 & then 3 lengths from the winner (rocketing home from last early). That third run put the writing on the wall for an impending win and it was when he was stepped up to 1600m at his two most recent starts that he started to show his best. At Wyong on September 20th he came from midfield to finish a very close second-just missing in the last bound by a head. He made amends though on October 1st when also at Wyong in a similar race,  he once again got home fast from back in the field this time to get the verdict with a bit to spare. The official post race comment on the Racing & Sports database was ‘…found the gap, burst into the lead and drew away. Smart win’.

It’s the opinion of his previous owners that although he’s got obvious ability, he may not be up to Saturday city class and better in Sydney which is what they look for. It’s my opinion that he’ll EASILY be up to city standard in Perth. He gives every indication that he’ll be suited by further than the mile, and he looks the ideal type to set for those regular 2200m staying type events run throughout the year in Perth. Hopefully, he’ll continue to benefit from the time given to him by Bart & James Cummings, and improve and develop into a Cups horse…

With regards to a trainer in Perth, we’ve been having a bit of luck lately with Ivan Haggerty who’s won city races for us with Minimalist, and Classy Cat, and also Secret Business too. Ivan has the benefit of his own 2000m sand track and is one of the most accomplished horseman in Western Australia.

On Monday October 12th, Solar Sky passed a rigorous veterinary inspection which included x-rays of his fetlocks, knees and hocks in addition to an endoscopic examination of his airways. The vet’s report said that he was a strong, good looking type, just over 16hh, and all of his joints looked good on x-rays.

On Saturday October 17th, he started his journey to Perth and is due to arrive on or around October 20th. Assuming he travels well, after a few days to get over the trip, we can see no reason why he can’t go straight into work and be racing at Ascot next month.