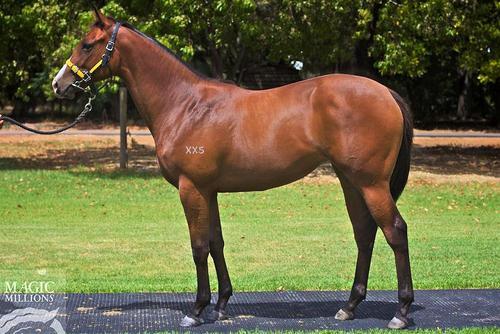 At the recent Perth Magic Millions Yearling Sale, we purchased a bay filly by So Secret from Smooth Mover from the draft of Oakland Park Stud (breeders of NORTHERLY, COVERTLY, MARASCO etc).

A jump and run looking type of filly who won’t take long to get to the races, she’s a half sister to three city winners, and will be trained at Ascot by Paul Jordan.

She was bred and raised by Neville and Sue Duncan who came into national prominence when they bred and raced the great galloper NORTHERLY. Now inducted into the Australian Hall of Fame, Northerly won 19 of 37 starts, including the Caulfield Cup, Cox Plate, Australian Cup, Underwood Cup, Yalumba Stakes and The Railway Stakes. The Duncans have also bred MARASCO (won Makybe Stakes), SHIRAZAMATAZ (Western Australian Derby), ROMAN TIME (Karrakatta Plate, WA Sires’ Produce Stakes) and COVERTLY (WA Railway Stakes; third AJC Flight Stakes), to mention a few of the horses who have galloped out of their paddocks.  In fact, in the last fifteen years, Oakland Park has produced in excess of 35 stakes horses from an average yearling crop of less than ten!

This filly’s pedigree jumped off the page at me when glancing through the catalogue pre sale as we raced both her mother Smooth Mover and her half brother Swiss Watch.  Both horses each won 4 races for us, and Smooth Mover was also Stakes Placed in the Listed Burgess Queen Quality too.

In addition to producing Swiss Watch (4 wins), Smooth Mover has also produced Bombara who has so far won 6 races (5 in the city), and Danana Smoothie who won 2 city races and ran 4th in the Belgravia Stakes.

So, as a broodmare, Smooth Mover has had three to the track and all have been city winners! As a broodmare, Danana Smoothie has produced the exciting 2yo city winner Busimiss, which leads me to remind you that when you buy a filly, you always have the further option of selling her for a pretty penny should she also end up showing her ability as a city winner..

In addition to the usual good prizemoney which is on offer in Perth, we also have the option of including her in the lucrative Westspeed and Westspeed Extra Bonus schemes which means more prizemoney for you!

All this lovely filly needs now are the owners to come along and enjoy the journey with her.  I hope you can be one of them, and just like others have done before, I hope this horse can bring you some of the best times of your life!