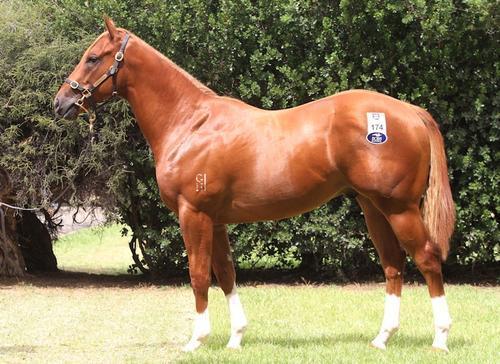 He’s the first foal from the multiple winning Conatus mare Miss Campbell who won all of her races on city tracks in Sydney. His second and third dams, Arrest and SHACKLE were both Stakes performers who won as two year olds, and at stud have produced six winners each. Arrest is actually a half sister to the very handy Confer who was placed at Group 1,2 & 3 level on five occasions! By the way, we’ve had a fair bit of success with the stock of Conatus already, having bought three of his progeny to race, and each of them have won in the city, those being Yamunotri, Military Secret and Paseo Del Prado.

So, here’s a very solid, well muscled chestnut colt, strong all over with powerful forearms and gaskins. A great walker who prowls around his paddock more like a panther on the hunt than a young racehorse, with correct conformation-he is, without doubt, the most precocious looking two type I’ve ever bought from a yearling sale. It’s almost as if he’s got ‘two year old runner’ stamped on that great big rear end of his! To that end, I’ve upped the sights a bit with him and sent him to Victoria to be trained at Cranbourne by Robbie Laing. Robbie knows a thing or two about training young horses having won Group and Listed races over the last few years with horses such as Boomwa, She’s Got Gears, Spectrolite, Lord Of The Sky, Golconda and of course POLANSKI, Robbie’s well documented $4,000 yearling purchase who went on to win the prestigious Group 1 VRC Derby at Flemington.

We’re very confident that people buying a share in this colt won’t have long to wait until the action starts and they see him at the races. Like all the other yearlings in Australia, he’ll officially turn two on August 1st 2014, and all being well, he’ll be making his race debut later in the year. All he needs now are the owners to share the excitement with him!

*Hoofnote: The Promoters Disclosure Statement for this horse is still being put together and the sale of shares is pending approval by the relevant racing authorities…