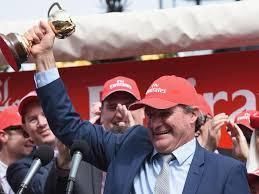 Forgetting the fact that he’s the Champion trainer in Victoria and trainer of the 2015 Melbourne Cup winner Prince Of Penzance, Darren Weir would have to be one of the nicest blokes you could ever possibly wish to meet.

The way he comes over in his numerous TV interviews, slightly bemused, always humble, and almost embarrassed by the success bestowed on him by his marvellously prepared stable of thoroughbreds is exactly how he is in real life. A boy from rural Australia who’s much happier with a lead rope in his hand than a microphone in front of his face, Darren Weir has rocketed to racing fame in Australia with not only a string of big race winners, but also a torrent of minor race winners too which have helped him attain the title of Champion trainer of Victoria.

Born in Berriwillock, in the Mallee District of Victoria, Darren was raised on the family farm. During this time he worked for various trainers in the area, including Jack Coffey in Birchip and John Castleman in Mildura. Darren then worked for Colin Hayes at the world-renowned Lindsay Park training complex, and spent a few months working in a stable in Ireland. On returning to Australia, Darren worked at Lindsay Park Stud.

In 1990, Darren moved to Stawell and began working as a farrier, servicing trainers in the Wimmera and Western District areas of Victoria, he then began breaking-in horses for a large state wide client base. Darren obtained his Owner-Trainer License in 1995 and his Full License in 1997. On relocating to Ballarat in 2001, the property was completely refurbished and is constantly being upgraded.

Darren has been leading Country Trainer since 2005 training over 100 winners each season. He’s prepared to take horses to the races where they have the best winning chance, as demonstrated by a winning strike-rate of close to 25%.

A perfectionist by nature, and one that leaves no stone unturned in getting the greatest ability out of each horse, Darren has the confidence, resources and the right team to ensure the stable keeps on succeeding.