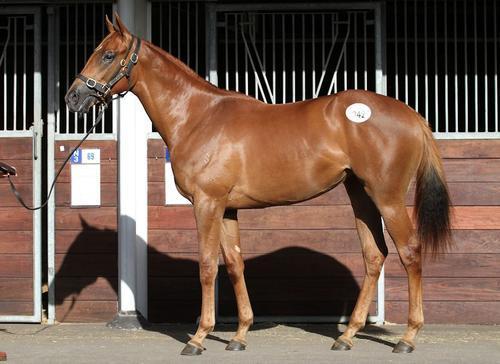 At the recent Inglis Classic Yearling Sale in held in Sydney, Caulfield based trainer Luke Oliver flew in from Melbourne (there and back in the same day) to inspect and buy just the one horse. It wasn’t just a whim though that had him travelling to Sydney and back in just a few hours. Luke had some inside knowledge on the filly that made him just had to have her in his stable.

The chestnut filly by MAKFI from Victoria Key is a half-sister to his current stable star and stakes placed mare Kansas Sunflower who from just 13 starts has won 2 races, been placed 5 times and won over $150,000 in prizemoney. Luke says there’s plenty more to come with her especially after seeing her finish second at Group 3 level beaten an absolute eyelash. He’s confident that she’ll develop into Group class winner-and that’ll make her a very valuable commodity indeed, so it was a no brainer that he should also get the filly’s half-sister into his stable too.

A physical inspection of the daughter of Makfi confirmed that she was indeed well worth the trip and Luke purchased her at the fall of the hammer late on the second day of the sale for $55,000.

Fortunately I was also at the sale looking to buy some less expensive horses for Grand Syndicates but was continuously beaten at the gavel in a very bullish market for yearlings. I asked Luke if I could buy half of his Makfi filly on the condition that it race with him in Melbourne in the blue and white colours of Belhus Racing Stables and very graciously, he said YES!

This great looking filly was bred in New Zealand (the third Kiwi bred yearling I’ve purchased this year) and is by the English Two Thousand Guineas (Group 1) winner MAKFI who has excelled at stud emulating his own prowess on the racetrack by producing over 100 individual winners including Group 1 winners in both the Northern and Southern Hemisphere’s. The filly’s dam Victoria Key was a winner over 1700m in France and at stud has produced four to the track and ALL HAVE BEEN WINNERS-three of them in New Zealand and of course the aforementioned Kansas Sunflower in Australia.

Her pedigree suggests that this filly will excel at a mile. Dad won at Group 1 level at 1600m, Mum won over 1700m in France, her half relations have won from 1200m to 2100m, her second dam won from 1600m to 2200m including at Group 3 level, and further down her pedigree, we see high class performers everywhere. In fact there are 17 individual Group and Listed winners in her first two generations mainly winning from between 1400m to 2100m including DOMINANT, the former English horse who went on to become the Champion Stayer in Hong Kong.

In addition to racing for the already lucrative prizemoney on offer in Melbourne, she’s also paid up for the rich Inglis Bonus Race Series too.