Our Pie ‘O’ My Wins At Toodyay! 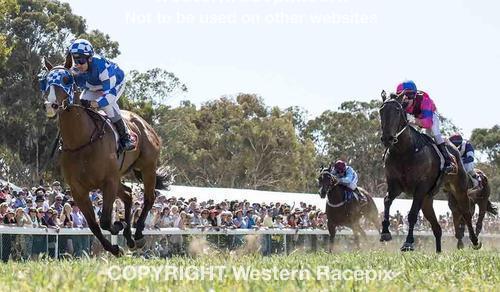 I love Toodyay! There’s something about it that endears the track to me. Maybe it’s the memories I’ve got of going there three decades ago as a teenager and standing in the bustling bookies ring-eyes wide open-where up to a dozen satchel swingers called the odds, maybe it’s the intricacies of the tight little undulating track that catches many a horse and jockey out, or maybe it’s just because I won the time honoured Toodyay Cup with my favourite neddy The Moon Day back in 2011-yep, that’s what it is…

Whatever the reason, this year’s annual Toodyay raceday was a ‘not to be missed event’ for us and to win a race with Our Pie O My was very special. Not that she’s any superstar on the global racing stage-Heavens forbid-we’re not getting carried away with winning a Toodyay maiden-but she’s a superstar to us.

A pint sized Aussie battler who struggles to walk with any degree of elegance let alone run, she stands out to all but the most audibly impaired in the ‘clip clop’ of morning trackwork as more of a ‘clip clomp’ type o’ gal. And I like that. Don’t we all admire someone-people or aniimals-that overcome adversity?

It doesn’t worry her though-and neither does it worry me. Having one leg shorter than the other is nothing new to the Morley’s. In 1914, my Great Grandfather got drafted for WW1 (he didn’t want to go-apparantly we come from a long line of cowards) and when he went for the medical, the excuse he used for not being able to go to war was that he had one leg shorter than the other. The Officer that was conducting the interviews looked him right in the eye and said ‘don’t worry lad, where we’re sending you, the ground’s not that level anyway’. And so, off he went to fight ‘The Hun’, miraculously survived, learnt to drink and gamble-passed it on to my Dad who dutifully passed it on to me, and rather indirectly it seems, all of that lead to the little Aussie battler Our Pie  My winning at Toodyay on Sunday. I hope you got on at 14/1….