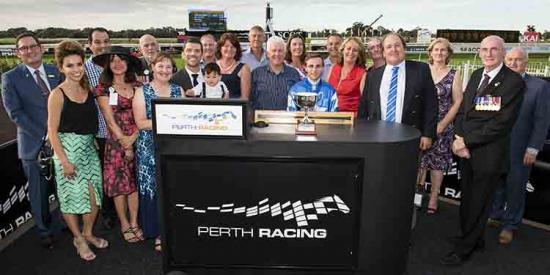 After an honest but unlucky second placing in the recent Geraldton Cup at his previous start, it was Paseo Del Prado’s day at Ascot on Saturday when he led throughout to win the 2016 running of the time honoured Diggers Cup!

Ridden an absolute ‘Pearler’ by jockey Brad Parnham who rated his mount to perfection out in front, Paseo Del Prado not only led by two lengths turning for home, but then extended at the furlong to win by an impressive 3 1/2 lengths.

Although all wins are a reason to celebrate by racehorse owners, Saturday was surely a day to remember as most of the gelding’s owners were on course to cheer him home-and weren’t they loud about it!

Once again, trainer Trevor Andrews turned Paseo Del Prado out in magnificent condition and the flashy chestnut with the white markings ran as good as he looked. Now out enjoying some time in the paddock, the goal for Paseo Del Prado in the immediate future will be the Kalgoorlie race round where he’ll tackle the Coolgardie, Boulder and Kalgoorlie Cups treble….