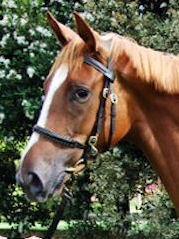 At Pinjarra on Thursday, the cleverly named Hyden (by Gallileo from Wave Rock) won over 2000m indicating her potential as an up and coming stayer. Having just her third run this time in, and considered unlucky last time out, the marewas allowed to settle early before unleashing a big run from near last at the half mile to win by a length and a half.

Hyden is from the Dual Stakes winning mare WAVE ROCK thus making her a half sister to our chestnut yearling filly (pictured) that we’re syndicating right now by PENTIRE also from Wave Rock. The filly is 95% sold and so just a 5% share remains at $6,600.