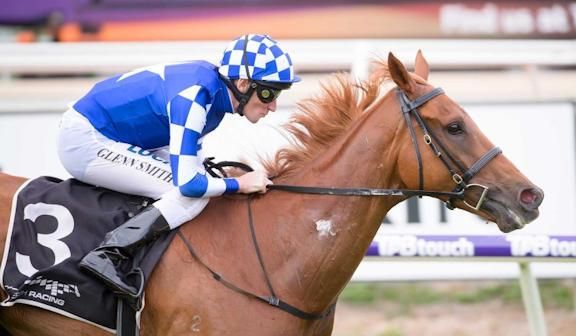 Prize Catch got his owners jumping for joy when he won the $100,000 Ascot Gold Cup (Listed) in Perth on Saturday.

Carrying the blue and white Belhus Racing Stables colours to victory for an impressive ninth time, Prize Catch had just 5 others to beat after a barrier mishap resulted in three horses being scratched prior to a restart-reducing the field to just 6 runners. Jockey Glenn Smith-who had just the one ride for the day-settled his mount in third place and didn’t let the leaders out of his sight for one moment. He set out after them turning for home and Prize Catch gained the ascendancy with 150m to go, eventually winning with a comfortable length to spare.

It’s an understatement indeed to say that trainer Lindsey Smith has done a marvelous job with this horse. He’s guided him through his career showing great patience, and has spaced his runs accordingly. Prize Catch has now had 30 starts for 9 wins-4 seconds & 2 thirds, for prizemoney of $341,000. He’s won from 1000m to 1800m, and by winning his ninth race, he now becomes the ‘winningest’ horse to race in the Belhus colours surpassing Mexican Mist and Xaarphonic (8 wins each).

A gelded son of Zoffany, Prize Catch was a $42,000 yearling sale purchase by Boomer Bloodstock.