PUT YOURSELF IN THE WINNERS CIRCLE WITH THIS LION HEART COLT! 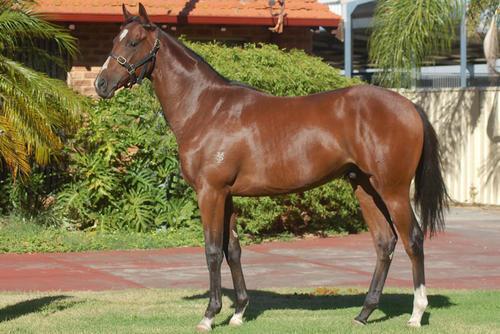 This colt is a good athletic type with plenty of presence about him. He’s got a competitive attitude and loves to be the centre of attention. His Sire LION HEART was a Group 1 winner in America who as a stallion has produced 327 individual winners to date. He’s best known in Perth as the sire of Caves Road which has won 5 races and in excess of $160,000…

The colt’s mother Krystal Storm has had two of her progeny to race and both have been winners, so we’re hoping that this colt can bring up the hat trick for her and you!

Ascot based trainer Ian Glading is very familiar with this family. He trained its mother KRYSTAL STORM to win The Queen’s Plate (Listed race) as a 2yo, and he also trained Krystal Storms half sister MISS VANDAL to win the Sire’s Produce Stakes (Group 3 race) as a 2yo too! So, there’s nothing like keeping it in the family!

This colt is eligible for the Westspeed Bonus Scheme, the Westspeed “Extra” Bonus Scheme, and The Magic Millions race Series -Perth only-($990 nom). So, a win in a normal Saturday race will return the owners a gross of $55,000! The cost of entering for these Bonus schemes will be $158 per 5% which can be billed at a later date before nominations close.

The breeders of this colt are retaining 50% ownership, and the remaining 50% is being offered into 10 x 5% shares priced at $1,800 each. The brochure is available by return email…