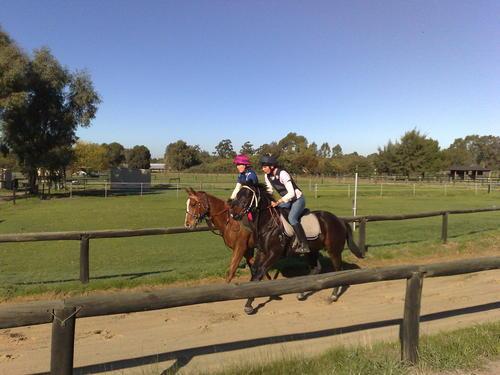 This is a rather lengthy read, but well worth it if you’d like to understand more about what happens when your two year old goes shinsore! PM

Shin soreness is predominantly a condition associated with two-year-old thoroughbreds. It can be a very painful affliction affecting the front of the cannon or shin bone, and a serious hurdle for the conditioners of young horses to overcome. The majority of cases occur just prior to or at the fast work stage and commonly involve both front legs. Where only one forelimb is affected it is usually the left (on anti-clockwise tracks) and is rarely seen in the hindlegs.

For trainers battling to get young horses to the racetrack, it’s little consolation to confirm that they are not alone with the problem. Reports from the United States quote an incidence of 70 per cent of all two-year-olds in work, and in one study 91 per cent of all youngsters in uninterrupted training for the duration of the survey showed signs of sore shins!

In Australia a recently published survey of trainers based at Flemington and Geelong estimated the incidence at around 80 per cent of two-year-olds. A much lower occurrence has been reported for horses in training in the United Kingdom, however, the authors only included cases which showed lameness and required a break from training.

Bone is not a fixed structural material like the girders of a building. It’s a dynamic living substance that is constantly being reabsorbed, manufactured and remodelled. The stimulus to new bone formation is stress or mechanical load and the bone cells are most active along the lines of greatest load. For the cannon or shin bone, the greatest stresses occur at its outside surface and especially at the front where new bone is laid down and as a result, thickening at the front is very obvious. To maintain it’s basic cylindrical shape, some resorption occurs from the inside surface which is subjected to the least load. So although the cannon bone has attained most of its adult length shortly after birth, its diameter and circumference continue to enlarge during most of the first three years of life in response to increasing load. This change is clear when viewing cannon bones of different aged deceased horses, which have been cut midway along their length.

When an individual horse is broken in and asked to carry the additional weight of a rider, particularly at speed, further loading is placed on the cannon bone. This load is also greatest at the front of the bone but in fast work it is disproportionately applied to the inside of the leg. The bone cells are stimulated to lay down new bone and the remodelling reflects the areas under most stress. Thus if we look at the cannon bone of a hardened campaigner, we see marked thickening at the front and inside of the leg.

Bone remodels according to the job it’s asked to do. The process takes time and only occurs in response to specific loading. Therefore a cannon bone cannot be fully adapted for galloping until it has had exposure to that level of stress. It must be trained just as heart, lungs, muscle and tendons have to be trained and strengthened. The new bone that is stimulated by work however, is not initially as well mineralised or as strong as older parts of the cannon bone. Even so it is still this remodelling and not just maturity that is required. This is supported by the view that most older horses that go shin shore have had limited campaigns as two-year-olds.

The training stresses important to stimulate bone growth can also cause microscopic damage and repeated loading weakens this less dense material. The weight of evidence suggests that continued damage leads to microfractures with a resultant inflammation. Depending on severity of the inflammation there will be varying amounts of heat, pain and swelling at that site and the horse is now shin sore. In severe cases, a large callous can form and the horse is said to have bucked shins.

Whether a given training regime will produce desirable bone remodelling or lead to stress fractures and soreness is influenced by a number of factors:

1. The size of the load applied. This is proportional to the weight of the horse and rider and the speed at which it is working. Overweight horses carrying heavy track riders at high speed are at most risk. In addition the ability of the track surface to cushion the load is important and so are types of conformation such as “back at the knees” are thought to place greater loads on the cannon.

2. The frequency of stress in a workout. The further a horse works at a given speed, the more bouts of stress it has to cope with at that particular outing.

3. The duration of the load. Horses with bad foot conformation or incorrect shoeing i.e. long toes and low heels, tend to hit the ground and slide instead of breaking quickly over the toe. This increases the time during which the cannon is under compressive stress. Track surfaces which restrict the ability of the foot to enter and rotate also prolong the load.

4. Bone strength. Previous work history: This is a significant, but often overlooked factor in that horses which have had extensive schooling and exercise prior to entering a racing stable will have already started the remodelling process. A short breaking-in period followed by paddock rest will do little to condition the cannon bone for galloping stress.

5. Nutrition: Feeding during the growing phases and when in work can both have considerable influence on bone strength. Correct energy nutrition is important for general development as well as bone growth. Immature, underfed yearlings are also likely to have poor skeletal development and will probably have other nutrient deficiencies.

Overfat youngsters will impose greater stress on legs at a given work load. Bone is approximately 20 per cent protein by fresh weight. Rations optimal in quantity and quality of protein are needed for production of its organic component and for synthesis of the enzymes involved in both formation. Bone strength is proportional to its density or mineralisation. Bone ash is about 36 percent calcium, 17 percent phosphorous, 0.8 per cent magnesium with traces of sodium, chlorine, potassium, fluorine and others. Inadequate supply during growth or training may result in poor bone mineralisation. In addition, copper, zinc and manganese are required in adequate levels for correct bone development.

Vitamin A is essential for bone and maturation and Vitamin D is an important regulator of bone and calcium metabolism.

Strategies to reduce the incidence of shin soreness

It is unlikely that the problem will be completely eliminated, particularly under Australian racing conditions where so much emphasis is placed on early two-year-old form. However, as we learn more about the disease process, steps can be taken to reduce its incidence and severity.

Training methods Time for conditioning is of paramount importance in two-year-olds. Where possible avoid long lay off periods and rushed preparations. Try to keep horses exercising after breaking in, even if they are only worked every second day at an agistment or pre-conditioning centre. While muscle and cardiovascular fitness can be achieved in as little as six weeks, bone tendon and ligament strength can take around five months to reach racing strength.

After sufficient “mileage” has been put into legs, gradually increase the speed of workouts, continually monitoring how the animal is coping with each additional stress. As fitness at each work level is approached, increase the speed of the final two hundred metres of each trackwork session to the next level. This increases the load on the shins but at a lower frequency than working the whole distance at the higher rate. A programme might include work at evens, (15 secs/200m) increasing to a working gallop, (14 secs/200m) for the last 200 metres. When this has been repeated sufficiently move to a working gallop then add final short sprints at close to racing speed.

If signs of shin soreness develop, ease the work load until the pain disappears and the horse is free in its action, then start the programme again. Icepacks and antiinflammatories to control pain and swelling are appropriate in the initial stages.

Nutrition: Ensure rations have an appropriate level and balance of energy and protein for the size and condition of the horse at its work level (regular monitoring of weight is very useful). Reduce grain levels, e.g. oats for overweight horses in light work and aim to have the horse in trim condition before fast work is commenced. Watch mineral nutrition carefully – based on analysis of typical West Australian feeding programmes, supplementation of calcium (and sometimes phosphorous) and copper and zinc is essential.

The addition of Vitamins A and D is also usually required, but they are oversupplied in many supplements and have the potential to be toxic at high doses so don’t feed in excess of manufacturer’s recommendations.

Farriery: Have horses shod to encourage the toe to break over quickly. Long toe – low heel conformation with a broken pastern axis increases the stress on the cannon bones and fetlocks. Make sure both feet are stood up evenly.

Track surface: Whenever possible only gallop on surfaces which have a good cushion and allow the foot to rotate easily in them. The lack of good training tracks is a contributing factor to many leg problems, including shin soreness.