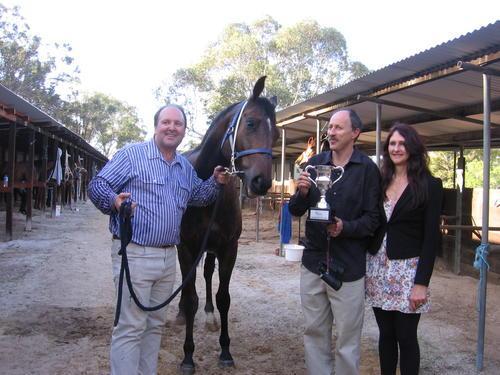 Six year old gelding ‘The Moon Day’ returned to his best when he won the Toodyay Cup on Saturday by two lengths.

Having his first start around the tricky and very undulating track, The Moon Day was expertly ridden by veteran jockey ‘Dashing’ Dan Miller who was riding winners at Toodyay long before most of the other jockeys in the race were even born!

The Moon Day was well placed throughout before taking the lead shortly before turning for home where Miller kicked him clear giving nothing else a chance. It was a very popular win, and both Dan and The Moon Day came back to a great reception from the crowd of around 1000 racegoers who obviously appreciated the fact that Dan is the oldest jockey riding in Australia!

The win was The Moon Day’s fourth from 44 starts and he’s pictured here after the race with trainer Peter Morley, part owners Mark and Janine Luzi and the Toodyay Cup!