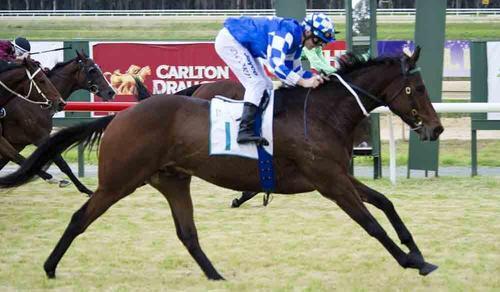 THE PUPSTER produced a huge run to come from last at the 800m to win easily at Pinjarra last week!

It took 18 starts to get there, but THE PUPSTER finally scored his maiden win when taking out the first race at Pinjarra recently.

After a serious of setbacks and glitches throughout his career, new trainer Brett Pope get him to the races trouble free and the big burly son of Bel Esprit (sire of BLACK CAVIAR) wowed us all with a Bernborough like finish to come from last at the half way point to get up and win in the last stride. It was a very exciting-almost breathtaking win, and it was just reward for the many owners of the horse who have stuck with him since originally buying as a yearling.

The win was also especially important for apprentice jockey David Corp as this was his first ever provincial win-and hence his biggest win to date! David had ridden eight winners previously, but all on far flung country tracks. It’s very probably that David hasn’t travelled a faster last 600m on a horse than he did on The Pupster yesterday!

As an apprentice to trainer Brett Pope, David rides The Pupster every day in his work and calls him his favourite horse. He was there to strap it when The Pupster ran first up this campaign at Northam when he was most unlucky, and of course the win on Thursday was his finest moment. With good balance, a decent set of hands, and a level head on his shoulders, David has the credentials to make it as a jockey-providing he can keep his weight under control.