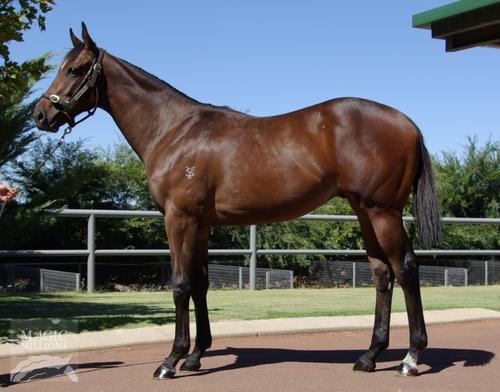 We’ve recently teamed up with trainer Lindsey Smith to offer a small number of exciting young racing prospects. The first, Prize Catch is already showing plenty of promise as a trial winner, and the second, Benny Benzine is currently unbeaten being a winner at his only start! This colt, by the outstanding winner producing stallion WAR CHANT will be our third….

There’s certainly no doubting WAR CHANT’S ability as both a racehorse on the track, and as a stallion in the breeding barn! A son of the mighty stallion DANZIG (himself by the greatest ever stallion NORTHERN DANCER), as a young racehorse in the US, WAR CHANT won 5 races from just 7 starts including the G1 Breeders Cup Mile on Turf. Unbeaten as a 2yo winning at his only start, he had 6 starts as a 3yo for 4 wins, 1 at Group 1 level, 2 at Group 2 level and a second in the Santa Anita Derby too!

From a physical point of view, this colt is very athletic and looks a real chance to run. He’s a half brother to the Gai Waterhouse trained KINNERSLEY whose 8 wins from 1300m to 2200m included 7 on city tracks and the Goulburn Cup too!  He won over half a million dollars in prizemoney and is one of just three winners from four to race (the other has been placed to date) so far produced by his dam Miss Radiant, who is very well bred being a half sister to the dual Group 1 winner and $988,000 prize money earning ELECTRIQUE (G1 Flight Stakes and the G1 Australia Stakes) as well as 6 other winners.

Her dam (so our colt’s Grandma if you like) had 9 to race for 7 winners. The two non winners have both done well at stud with Decipher (unplaced from only one start) being the dam of FONTELINA (winner of over $977,000), and the unraced Cheglory being the Grandam of the dynamic sprinter POWER PRINCESS who’s 12 wins in Perth included the G3 AJ Scahill Stakes, the G3 Roma Cup, the G3 Prince Of Wales Stakes, in addition to placings at the elite level in both the G1 WATC Winterbottom Stakes and the G1 SAJC Robert Sangster Stakes too.

This colt was selected from the Perth Magic Millions 2016 Yearling Sale by CRAIG ROUNSEFELL who operates internationally as BOOMER BLOODSTOCK and trainer LINDSEY SMITH.