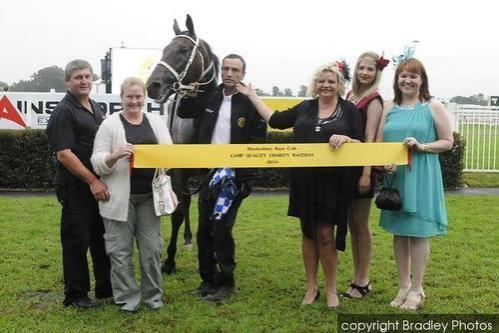 Winning Ticket opened his winning account with an exciting win at Hawkesbury on Thursday. There’s a lot of ‘wins’ in that sentence!

Having showed us definite ability at his first four race starts, it was this race-just the fifth of his career where he shone through. Ridden a very good race by top jock Hugh Bowman, he was always in contention, however when the leader slipped away with what appeared to be a winning break with 200m to go, it looked like we were going to run second again. Bowman and Winning Ticket dug deep though and closed in over the final 50m to just get up and snatch victory in the last few strides of the race.

To win with quite a hefty weight on a rain affected track was some effort, and after knocking off his provincial maiden, he’ll now get his opportunity to go to town for a crack at NMW race (no metro wins) over 1900m at Canterbury on April 23rd.