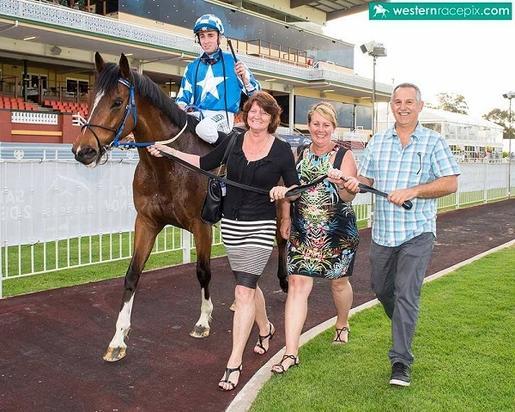 After battling injury and setbacks for the last two years, Belhus Racing‘s West Australian-based Solar Skycapped a remarkable comeback to racing by saluting in the Lithium Australia Handicap (Race 8-1600m) at Ascot on Wednesday.

The Martin Allan-trained seven-year-old, who was formally trained in Sydney by James Cummings, arrived in WA in October 2015, however, debilitating back issues had restricted him to only three starts in the West prior to this week’s triumph.

After some encouraging trial results in September, Solar Sky finished an eye-catching third first-up for the Allan stable at Northam on October 8, before pulling away late to score a fairly dominant Ascot win, aided by a terrific ride from quality jock Chris Parnham.

Allan will also be stepping out speedy three-year-old Roger The Dodger in Heat 14 at the Belmont barrier trials on Monday.

Belhus Racing will also have promising unraced two-year-old King Of Planets trialling in Heat 4 at the same session. The Trevor Andrews-trained son of Planet Five showed some good signs in his initial 400-metre Lark Hill trial on October 16.